The Starz series features “Hamilton” cast member Jasmine Cephas Jones, playing the role that was a supporting character in the 2018 movie. The series was co-created by Rafael Casal and Daveed Diggs, and her former stage castmate Daveed Diggs, who also wrote and starred in the film. Yet instead of a series continuing the story about the male leads, as the studio had suggested, the producers opted to shift the focus to Cephas Jones’ Ashley, trying to get by living in California’s Bay Area after her partner Miles (Casal) is imprisoned for selling drugs.

Ashley winds up moving in with his hippy-ish mother (Helen Hunt), and his hostile half-sister Trish (Jaylen Barron), whose vocation is online sex work. The series possesses a musically-tinged energy, with Cephas Jones periodically expressing her feelings and fears by delivering poetic spoken-word monologues directly to the camera, and characters breaking into impromptu dance numbers at various moments.

Those elements — and the decision to essentially turn the sequel into a series instead of a movie — underscore the fluidity now between the two media, while enhancing the flavor of what’s otherwise a fairly familiar tale of a single mom suddenly forced to get by on her own. 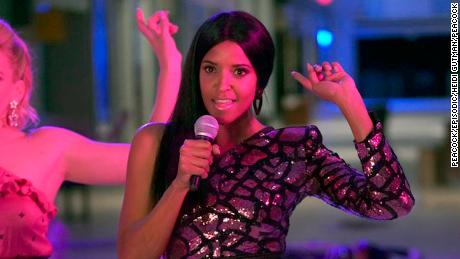 The format also allow flights of fancy that don’t much advance the story, like Ashley and Trish spending a soul-searching, drug-taking day at the beach; and smartly written detours like an extended debate in a later episode about whether Ashley’s mixed-race son is having enough of a “Black experience.”

As it happens, “Blindspotting” arrives the same weekend as “In the Heights,” a movie adaptation of Miranda’s pre-“Hamilton” musical, which stars another “Hamilton” veteran, Anthony Ramos. The Warner Bros. movie has received mostly rapturous reviews and will hit theaters as well as HBO Max, like CNN, both units of WarnerMedia.

In addition to that, Ramos — Cephas Jones’ real-life fiancé — has a small recurring role in “Blindspotting” and co-stars in HBO’s revival of “In Treatment.”
Elsewhere in streaming, “Hamilton’s” Renée Elise Goldsberry is among the stars of “Girls5eva,” a series about a 1990s girl group that gets a second chance at fame, which premiered in May on Peacock, Comcast’s streaming service. (Diggs has a separate series of his own, “Snowpiercer,” which has been renewed for a third season by TNT.)

“Hamilton” launched on Disney+ last year over the Fourth of July weekend, providing both a welcome distraction during the pandemic and a reminder of all the theatrically planned movies being diverted to streaming.

The movie also served as a reminder of the abundant talent that Miranda and his collaborators assembled in the Broadway production, which clearly wasn’t lost on Hollywood. And as the US opens up again, these “Hamilton” alumni are getting a chance to tell their stories.

“Blindspotting” premieres June 13 at 9 p.m. ET on Starz. “In the Heights” premieres in theaters and on HBO Max on June 11.