Born in Argentina and raised in Claremont, California, Garcia was always a natural performer. She started dancing when she was 4 years old and at one time aspired to attend Juilliard. That is, until she became hooked on an action-drama series about a counterterrorism agent played by Kiefer Sutherland. It was great television, her obsession, and, later, helped inspire her career path pursuing two passions — television and entertainment.

“For whatever reason, that show just provided like a light bulb moment for me,” she said.

With zero connections in the industry — her parents waited 13 years to come to the US from Argentina and eventually did so with three kids “and a bit of a prayer” — she had no shame in “playing the student card” to get people to meet with her and discuss her ambitions. Her family motto is “toma el toro por las astas” (take the bull by the horns) — and she did just that.

She ultimately landed an internship at what was then called 20th Century Fox Television, the studio that produced her favorite show, and a door was opened.

“During my first internship, which was unpaid, I would commute four hours every day to the Fox lot, but I wanted it so badly, I was like, ‘I don’t care. I’m making connections here. I’m doing good work,'” she said.

After nine years at Fox and five and counting at Netflix, she still is doing good work as the director of original series at the company.

Finding a Latinx person at Garcia’s level in Hollywood is a well-noted rarity.

Executives in positions to decide — unilaterally or, as in Garcia’s case, as part of a team — what projects are purchased or what writers, directors and actors are hired. They are considered the ultimate gatekeepers in the industry because they get to spend money and influence what creatives are — or are not — being invested in.

Having Latinx leaders in all corners of the industry is important — they are needed in marketing as much as they’re needed as department heads on set — but without representation at the very top, meaningful change will be difficult, if not impossible, to achieve.

Lasting change is what Netflix hopes to achieve with a recently-announced plan to invest $100 million to help make its programming more inclusive.

“Netflix has become very aware of where we as a company need to be better and have committed actual dollars to helping funnel that,” Garcia said.

Part of that initiative will involve funneling money to organizations and programs that will help creatives from underrepresented groups “be found” and “give them the tools to be excellent,” Garcia added.

“This isn’t about lowering the bar in any way. It’s about opening up the possibilities of where excellence can come from,” she said.

“I love it when people of our culture shine,” Garcia said. “It’s just a good thing for, you know, la gente. The world needs more of that — not at the expense of anyone else — but I want us as a people to feel the pride in who we are and what we do.”

Pride and joy. Too often, Garcia said, Latinx stories are centered on pain or trauma, which is far from the whole story of the culture.

“We are a joyous bunch,” she said. “One of the issues that we’ve had with what I call the trauma stories is that people come in and say ‘We’re going to tell this really sad story about being Latino or being an immigrant.’ Then I say, ‘Okay, who are you making it for? Who are you trying to invite into that experience?’ For me, it’s so much more about showcasing Latinos in hero roles and hero positions because we’re out here doing it. It’s just not reflected really on screen.”

More attention is being paid now, too, to who studios and networks choose to tell stories about underrepresneted groups. This debate — for example, whether only Latinx creators should tell Latinx stories — is a complex one with heated opinions on both sides. Garcia fears that setting too strong of a rule either way will ultimately limit creators’ opportunities.

“The bad outcome, in my opinion is only Latinos can tell only Latino stories. Only White people can tell White people’s stories. Only Black people can tell Black people’s stories. Because I also want Latinos in White stories and Latinos working in rooms for Black creators,” she said. “I think if someone comes in and is telling a story about a Latino family and they are not themselves Latino, that’s ok. The important piece is making sure we’re populating the series with writers, directors and actors who have authentically lived that experience, so they can inform the authenticity of the storytelling.”

Ultimately, Garcia said, authenticity is hard to mimic and someone’s lived experience will, more often than not, shine brighter in the end.

“As a human who watches things, I love it when I see something on TV and they hit on an idiosyncrasy that makes me think, ‘This is so my family.’ Like, there’s a baby Jesus is in every drawer in the house or, like, someone talks to their mom 150 times a day,” she said, not long after admitting the ping on her own phone was her mother texting her. “That moment of connection between someone you see on the screen and your experience, it makes you feel like, ‘Oh, I’m not alone in the world.’ I want people to feel less alone in the world.”

That includes, she said, Latinx people from different experiences and backgrounds.

“If we can provide a place for people to feel seen, it just makes you feel better,” she said. “And I think we all deserve to feel a little better.” 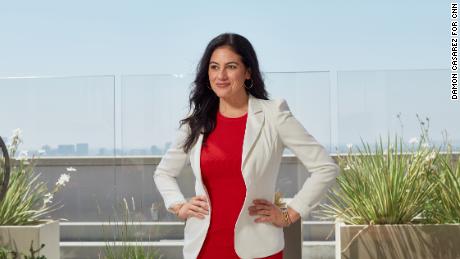 Latinx trope I’d banish forever: “All Latinos that have money are drug lords.”

Latinx actor/actress I think will a huge star one day: “Olga Merediz, who plays Abuela Claudia in ‘In the Heights’ because I love seeing people in mid-career finding new success. And Manuel Garcia-Rulfo. He’s already a star but we just cast him in our series ‘Lincoln Lawyer.’ Also, Jenna Ortega, Melissa Barrera and Edgar Ramirez. There are so many!”

Latinx TV show I wish everyone was watching/had watched: “‘On My Block.’ It has a fierce loving and a fierce following and I want more people to love it and watch it.”

Overused line that executives say when passing on a Latinx project: “We already have a Latino show.”

What I think all executives could do to better Latinx representation on television: “We can be more intentional about where we look for writers and where we uncover and discover talent. I also think it’s incumbent on Latino talent to show yourselves. There are so many ways now for people to connect or for people to show their craft and be discovered. I think in terms of like executives and decision-makers, spot that talent who, honestly, like me, isn’t perfect coming out of the gate. But the thing I do know about Latinos is we are the embodiment of the si se puede attitude. Lastly, the next generation needs to know they can become the change-makers of the future. You can build a really wonderful life and a great career and be involved in so many of these decisions. You just have to ‘toma el toro por las astas‘ and go for it!”