For nearly six years, students had been taking introductory and advanced anthropology classes surrounded by a couple hundred skulls that made up only a fraction of the massive Morton Cranial Collection, named after Samuel George Morton, a physician and anatomy professor who used racist pseudo-science to advance White supremacist ideas.

The University of Pennsylvania is now planning to rebury the skulls of at least 13 Black Philadelphians whose remains were kept as part of the Morton Cranial Collection that has been housed in Penn Museum since 1966. In 2014, a portion of the collection was moved to a classroom following the construction of new facilities within the museum dedicated to archaeological analysis.

The reburial effort came out of the nation’s racial reckoning following the murder of George Floyd in 2020, leading the museum to examine its colonial and racist history when it came to their practices surrounding the collection of human remains. Student and community activists were at the center of calls to return the remains to descendant communities.

“Our goal is to do the right thing and rebury these individuals after 170 or so years and do it as respectfully and as dignified as we can,” said Christopher Woods, the director of the museum.

Penn Museum is petitioning the Philadelphia Orphans’ Court for permission to rebury the skulls in Eden Cemetery, a historic Black cemetery right outside Philadelphia. Woods said if the court approves the burial, the museum hopes to hold an open, interfaith ceremony at the cemetery in the fall to commemorate the reburials. 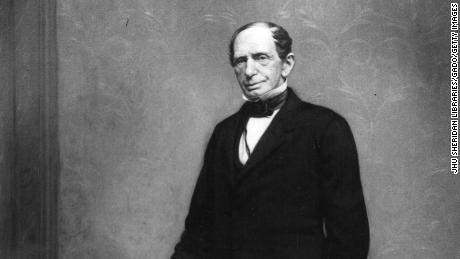 Yet some community members believe Penn Museum should not be leading the effort to rebury the remains. Abdul-Aliy Muhammad, a lifelong West Philadelphia native, community activist and member of the community advisory group, filed a formal objection to the reburial in the Philadelphia Orphans’ Court.

They said although they don’t disagree with the reburial of the remains, they feel like the process has been rushed with a lack of community control and input from descendant communities.

“I don’t think an institution that has financially, culturally and sociopolitically benefited from the violent removal of remains from the ground in the name of so-called science can be the same institution that holds the healing process,” Muhammad said.

In response, Woods said he believes it’s the responsibility of the university and museum to facilitate the reburial process given that the skulls are in their care. He added that the university today is not the same institution it was in 1840.

“I think it’s our responsibility as stewards to do the right thing, and we should do it in consultation with the community and that’s what we’re trying to do,” Woods said.

As part of his pseudoscientific research, Morton acquired about 900 skulls, including some from enslaved people, throughout the 1830s and 1840s. Following his death in 1851, the Academy of Natural Sciences of Philadelphia continued to add to the collection, obtaining skulls from all over the world to increase the collection to well over 1,300 cranial remains, according to Penn Museum.
In his 1839 book “Crania Americana,” Morton referred to Black people as the “Ethiopian race,” adding that this race at its most extreme was “the lowest grade of humanity.”

Decades later, Morton and other archaeologists were increasingly scrutinized for their work and schools were forced to grapple with how these figures were at the forefront of advancing scientific racism.

‘Reconciliation does not mean to cover up your past’

In July 2020, Penn Museum relocated a portion of the Morton Collection displayed in a classroom since 2014 to storage. This classroom display included the skulls of some of the Black Philadelphians as well as remains from enslaved people from Cuba. About a year later, Woods, who had just entered his new role as museum director, formally apologized for “the unethical possession of human remains” and highlighted the museum’s intent to initiate a process of returning the remains to their ancestral communities.

A few months later, the museum formed the Morton Cranial Collection Community Advisory Group, made up of community leaders, to make recommendations toward reconciliation and the respectful repatriation and commemoration of the remains. 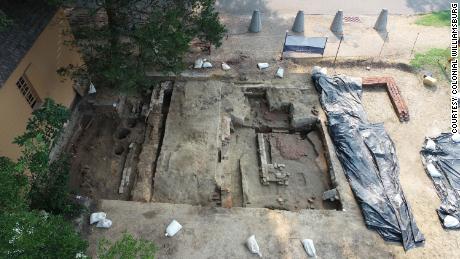 Woods said he sees the reburial as a way for the university to address its complicity in slavery, adding that this is only a first step in the institution addressing its history and moving forward by doing the right thing.

He said after the reburial of the 13 Black Philadelphians, the university plans to focus on the return of the 53 skulls of enslaved people from Cuba, hire a bioanthropologist of color, as well as create a marker on campus that addresses Morton’s racist legacy as a way of “owning up to the past.”

Rev. Jesse Mapson, a senior pastor at a West Philadelphia church and member of the advisory group, said he supports the burial of the cranial remains at Eden Cemetery and thinks it’s a move by the university to begin to establish a better relationship with Black Philadelphians.

“Reconciliation does not mean to cover up your past, it means to look at it openly,” Mapson said. “Honestly, I think Penn has recognized its history in terms of what was done in another day and another time.”

Throughout the mid-19th century, Morton collected skulls and measured them to advance White supremacist ideas emphasizing the intellectual superiority of White people over other racial groups. His research has since been discredited by a multitude of modern scientists and anthropologists who’ve found his methods to be prejudicial and inaccurate.

Paul Mitchell, a former anthropology PhD student at the University of Pennsylvania, said although ideas linking brain size, intelligence and racial inferiority were not unique to Morton during the 19th century, the scale and scope of his collection and research was unprecedented. Morton’s affiliation with the University of Pennsylvania’s medical school, known as a state-of-the-art, elite institution, further allowed for the proliferation and general acceptance of these racist ideas, he added.

“When we talk about scientific racism and these intellectual, pseudoscientific justifications for slavery, they’re not all coming from the South,” Mitchell said. “Some of the most important ones are actually coming from the North.”

Morton’s research was co-opted by White supremacists in the antebellum South to argue for the preservation of slavery based on ideas that Black people were inherently inferior. Following Morton’s death, the Charleston Medical Journal in 1851 wrote an obituary stating, “We can only say that we of the South should consider him as our benefactor, for aiding most materially in giving to the negro his true position as an inferior race.” 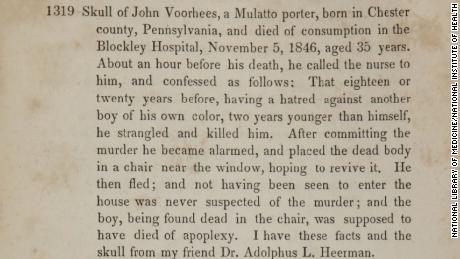 Mitchell, now a researcher at the University of Amsterdam, authored a report last year about the Morton Collection highlighting Morton’s racist legacy. Mitchell details how some of the skulls in Morton’s collection were sent to him by colleagues, but he personally obtained skulls belonging to Black and White Philadelphians. During his time working as a physician at the Blockley Almshouse, a charity hospital where Penn Museum currently stands, the skulls of the Black Philadelphians were likely stolen from unmarked graves, he added.

Of the 13 Black individuals, only one man named John Voorhees is documented by Morton. In 1846, 35-year-old Voorhees, who Morton refers to as a “Mulatto porter,” died of tuberculosis in a Philadelphia hospital. In his deathbed, he allegedly confessed to a nurse that he murdered someone about one to two decades earlier.

Mitchell said he suspects Morton explicitly named Voorhees as a way to shame and brand him as a criminal based on his alleged murder confession that Morton knew of only based on what a fellow White physician told him. In the 19th century it was common practice to “shame” alleged criminals by announcing their deaths. This shame was further applied posthumously when their remains were named as a part of an anatomical collection, Mitchell added.

“So many eyes are on Philadelphia now, given the significance of this reburial for prompting a major shift in how we think about museum collections and the ethics of possessing human remains,” Mitchell said.

A growing effort by intellectual institutions

The reburial efforts at the University of Pennsylvania are part of a broader conversation about the ownership and treatment of Black remains by museums, collectors and other intellectual institutions.

At Virginia Commonwealth University, researchers recently began working to learn the origins of human remains, most of which belonged to individuals of African descent, found in a well at the university in 1994. At Harvard, a draft report by a steering committee established to make recommendations for Harvard’s collection of human remains urged the university to return the remains of Native Americans and enslaved people to descendant communities. 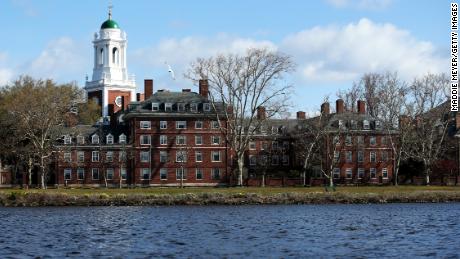 Woods said part of the museum’s reconciliation efforts is to go “beyond a NAGPRA-based infrastructure,” referring to the 1990 Native American Graves Protection and Repatriation Act, a federal law requiring the repatriation of Indigenous remains.

There exists no similar law for African American remains, which makes what’s happening at the University of Pennsylvania more important and urgent, Woods said.

Mapson said he hopes the reburial efforts can serve as a model for other communities across the country dealing with similar questions related to reconciliation and repatriation.

“Penn is not alone, in terms of being a prestigious university that has historically not been responsive to the needs of the communities,” Mapson said. “Because Black lives were not important, neither was Black death. And so how do universities show respect in terms of the needs of community, and the perception that the universities don’t care?”