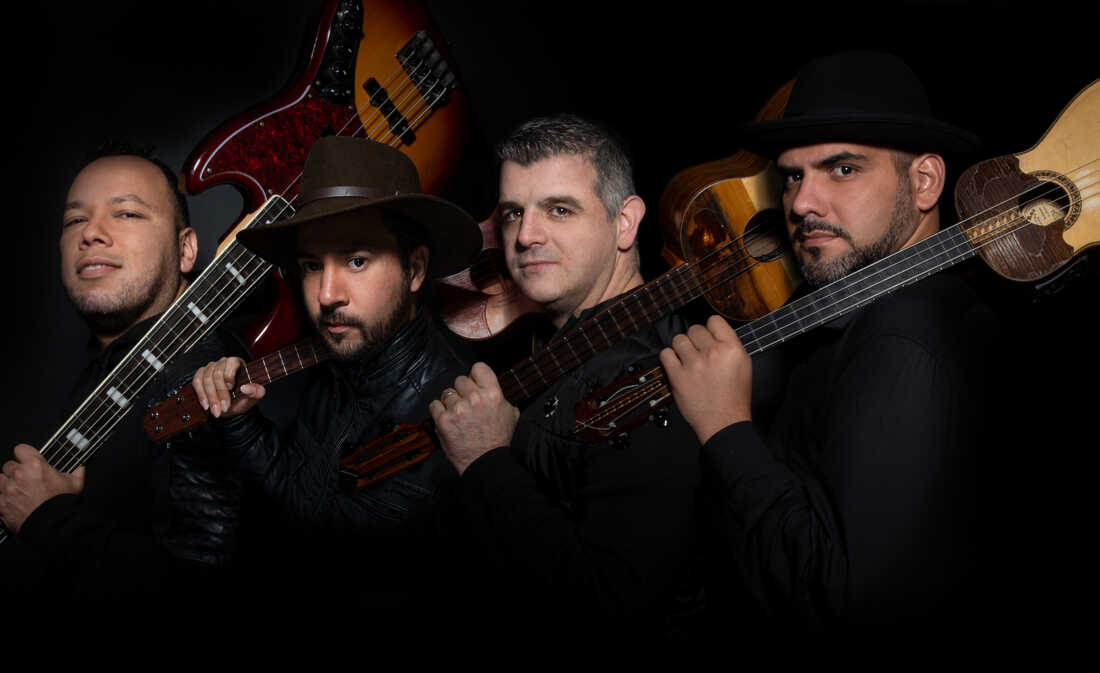 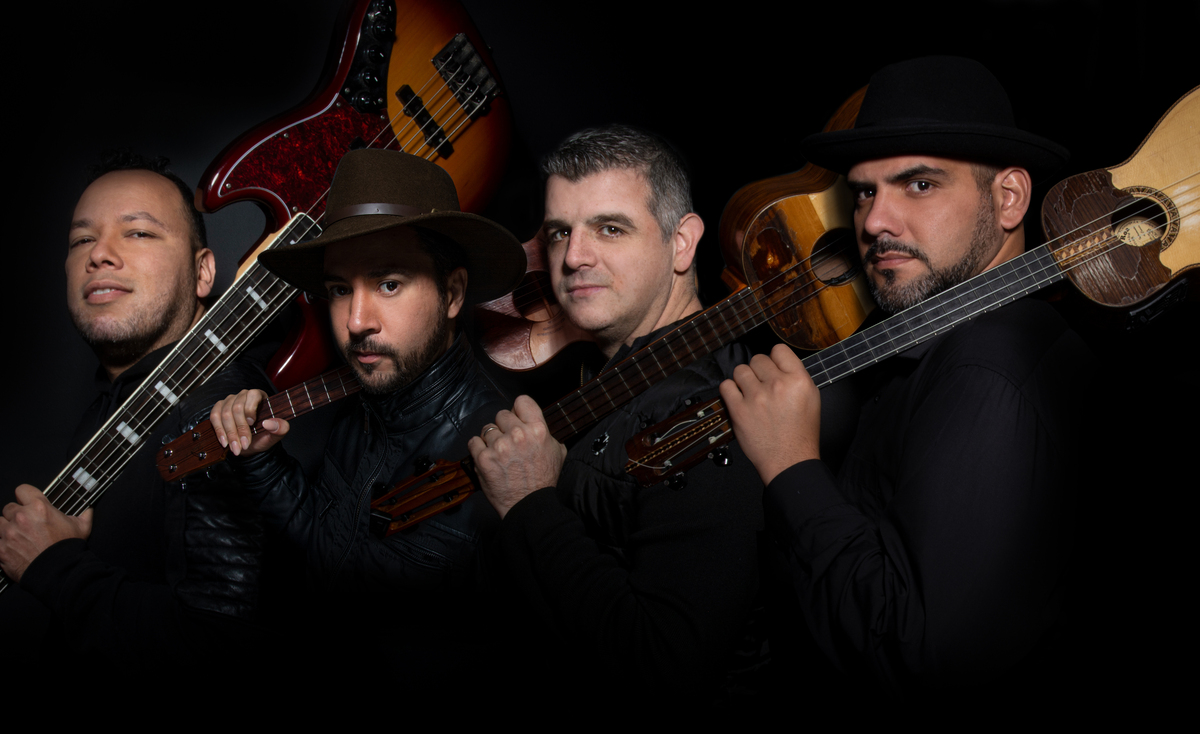 The title of a new book about C4, written by Venezuelan journalist Gerardo Guarache Ocque, sums up the essence of the singular group: La Leyenda de los Cuatros Explosivos. The group — composed of cuatro players Edward Ramírez, Héctor Molina and Jorge Glem, as well as bass player Rodner Padilla — is a legend, and their music is an explosion of sounds.

Edward Ramírez says what brought them together was a strong desire to play music that was not from Venezuela, on the Cuatro. “But we also wanted to challenge ourselves and play Venezuelan music from a different point of view, and play other music genres with the Cuatro” Ramírez says. “We wanted to find new ways for the cuatro to expand its palette, so that the possibilities of the instrument would continue to grow.”

In 2005, Ramírez, Glem and Molina were each invited to play solo pieces at a concert in Caracas. Each musician is from a different region of Venezuela, and they admired each other’s style. After rehearsing a few tunes together to play at the end of the concert, they liked the sound of the multiple cuatros so much that they decided to form a group. The following year, they recorded their first album and adopted C4 as their name, in reference both to the cuatro and the guitar group known as G3. Their self-titled album launched their career. Bass player Rodner Padilla joined them in 2009.

The cuatro is a small, guitar-like instrument, with four nylon strings. It’s played across the country, in many different styles of music. Every Venezuelan family has a cuatro hanging on the wall, says Héctor Molina. “It’s undergone a huge development in recent years,” he says. “We always say that we’re a consequence of the work that’s been done for the instrument by masters such as Jacinto Pérez, Hernán Gamboa, Fredy Reyna and Cheo Hurtado. They’re major figures of the Cuatro and musicians who have helped to expand the sonic possibilities of the instrument.” 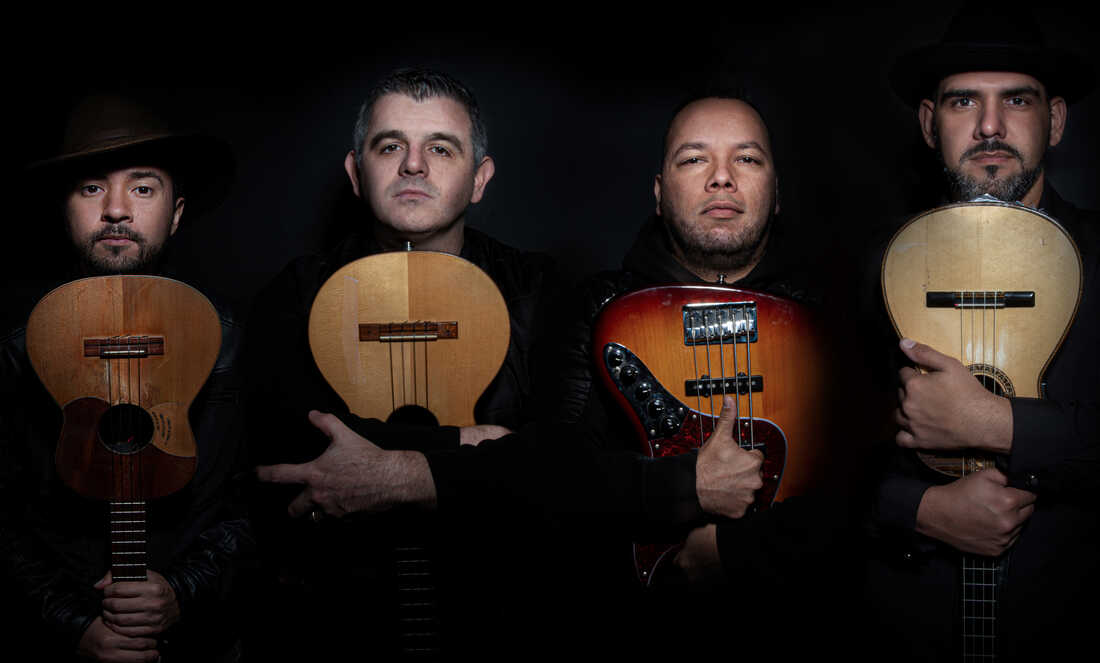 Ramírez, Molina, Padilla and Glem are now based in Miami, due to the political and economic climate in Venezuela. “It’s a very tough situation and we hope that this nightmare ends soon so we can go back and do concerts in Venezuela,” Glem says.

Musician and producer Michael League invited C4 to play at the GroundUp Music Festival in Miami Beach a few years ago. The festival is run by League’s GroundUp Music, the group’s new label. “C4 is like the group that our festival was made for,” says League. “It’s a group that maybe a lot of people don’t know about, outside of their kind of niche, in the music world. But it is impossible to see them play and not remember them for the rest of your life.”

League co-produced C4’s forthcoming new album, Back to 4. He says the group has one foot in tradition, one foot in innovation, and the desire to mix and constantly add colors to their palette. “These guys can make their instrument sound like a conga or a flute. They’re not bound by the tradition. And I’m not an expert in that tradition, but just from five minutes of speaking with them, you can tell that their heads are as much in the future as they are in the past.”

As the social, political and economic situation got more complicated in Venezuela, the members of C4 realized they had to move somewhere else to keep the group alive.

In 2014, C4’s bass player, Rodner Padilla, migrated to Miami. Glem went to New York in 2016, and Molina arrived in Miami the following year. Ramírez first migrated to Colombia in 2017, and then moved to Miami last year.

Now, the group is together again, based in Miami, home to the largest Venezuelan immigrant community in the U.S. Glem says despite the ongoing difficulties in Venezuela, they remain positive and hopeful. “Wherever we go, we try to put on the most beautiful face of our country and we do whatever we can to help our folks back home,” he says. “It’s a very tough situation and we hope that this nightmare ends soon so we can go back and do concerts in Venezuela.” Glem says the cuatro is their flag and they just want to play music, in their own, sometimes explosive, way.

A documentary on the group, 10 years