Underwood and Legend teamed up for “Hallelujah” in 2020, and despite some stiff competition in the category the duo prevailed. The voting was done by fans via Twitter.

Underwood is the most awarded artist ever at the CMTs, and it was Legend’s first CMT win. 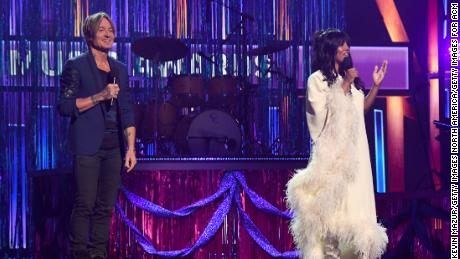 “Fans, thank you so much, fans. You guys, you are the reason we are all here doing what we do, doing what we love, making music videos,” Underwood said during her speech. “John Legend, thank you for sending me this incredible song and agreeing to sing with me on it and making this incredible video that I am so proud of, and congratulations on what I think is your first CMT Award! God bless you guys. Thank you so much! Thank you, fans! Thank you, CMT!”

Legend took to Twitter to show his appreciation for his first CMA, thanking Underwood, director Randee St. Nicholas, and his co-writer Toby Gad. Legend noted that Gad also co-wrote his hit “All of Me.”

The show aired live from Nashville and was hosted by Kane Brown and Kelsea Ballerini. And it was a who’s who of country music with some of the industry’s biggest stars hitting the stage, including Chris Stapleton, H.E.R., Dierks Bentley, Chris Young, Luke Combs, Luke Bryan, Miranda Lambert and Thomas Rhett.